Sense Tecnic maintains strong ties with local universities and the IoT research community and has been at the cutting edge of IoT development since 2010. We are active participants in conferences such as Internet of Things and the Web of Things Workshop. Currently, Sense Tecnic is working on several projects that will be incorporated into the core WoTKit platform. If you are interested in learning more about these research projects or participating in testing as they transition into production, please send us your contact information, and we’ll keep you up to date on our progress.

FRED: a Front End for Node-RED.

Node-RED is an open source visual development tool from IBM simplifying the job of wiring up today’s world of things and services. Sense Tecnic is working on a multi-tenant host for node-red for users to integrate it with the WoTKit, and rapidly spin up and host their Node-RED flows in the cloud. Using FRED, developers are able to leverage Node-RED’s ability to integrate APIs and services available on the web to rapidly create IoT applications for data processing and analysis without the need to deploy and host Node-RED themselves.

Get the slide deck or get the technical paper 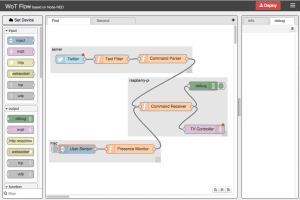 For those that want to hack some,  the GitHub repo is here 🙂

HyperCat is an emerging standard for IoT data Hubs. SenseTecnic were one of the original authors, developed the first commercial implementation, and have incorporated HyperCat into the SenseTecnic IoT platform. The work was carried out as part of the SmartStreets project.